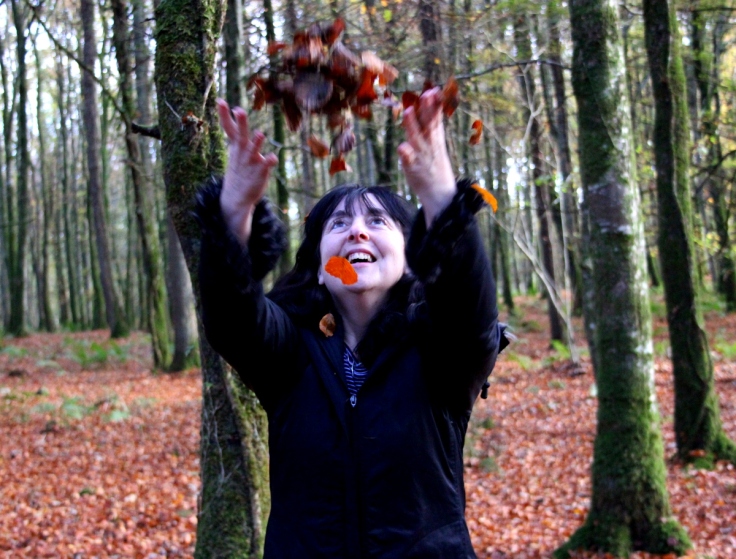 I’m not going to lie it’s been a rough year and one that I won’t be sad to see the back of. It has taught me so much about myself though and I believe I’ve become a better person – most of the time.

The self-loathing is no longer there. I don’t think I’ll ever consider myself to be beautiful but at least now I don’t feel ugly….unless I catch my reflection first thing in the morning!

The weight issue isn’t as much of a problem either. The batteries in my weighing scales are dead so I can’t weigh myself eight times a day! I’ve also copped the fact that I’m not going to be stick-thin so if I want a cake I’ll have a cake.

The reason I wrote this post is that Lucy took a photo of me and I actually love it. I never thought I’d say that about a photo I’m in. I look carefree and happy and in that moment I was. I also think I don’t look so bad for someone who is almost 50.

When I look at the photo I think I have nice eyelashes as well as ‘nice hair’ and I don’t know if I ever told you that story so here goes:

There was an assertive and mindfulness course being held by a well known Sligo organisation earlier this year. I went along with Lucy hoping that it might help me cope with my panic attacks and depression….it did the opposite:

We were told to list all the positives qualities about ourselves. I wasn’t in the right frame of mind to do this and told the facilitator (who is a mindfulness coach) that I’d rather not take part in this exercise. She kept on and on – she even asked me what my dogs thought of me! Bizarre!

Instead of suggesting I take a break she moved on to the next section where we had to draw a heart with all our positive qualities written around it. At this stage my leg was shaking and I knew I was going to have a panic attack if I didn’t leave the room. So I excused myself and said I needed the loo. I couldn’t get out of the door – the handle was stuck and the more I tried the worse it got. At this stage I was in full on panic mode. One of my biggest fears was being trapped and I was. Yer woman had to come over to open the door.

I flew down the stairs, a slobbering, shaking mess and locked myself in the toilet. I would have been OK if I could have had some time to calm myself down but no, there was yer wan banging on the door….and truth be told I really needed a pee! In the end I had to let her in and she hugged me – something else I really don’t like! I’m not a fan of hugs unless I initiate them. So I snotted all over her, I know I paint a lovely picture and she was still banging on about me finding positives about myself! Jaysus she couldn’t give it a rest….in the end she said oh come on at least you have nice hair……

So that’s me – I have nice hair. It’s actually really funny now looking back at that moment but at the time I was in bits. If this lady happens to be reading this post I don’t just have nice hair I have nice eyelashes too and a nice coat – charity shop bargain!

8 thoughts on “Looking back and feeling better”