First of all a massive thanks to you all for your messages, you really are all brilliant!

Now onto other news. Today I woke up early (still in Dublin mode). Got dressed and was in the kitchen contemplating whether or not to have breakfast when all of a sudden I noticed my kneecap moving….and could feel a tickle on my leg (lucky me I hear you all say). So I shook my leg a bit but my knee was still jigging about. In the end I decided to take my trousers off and the mother of all spiders crawled out. It was huge, with it’s long hairy legs and big ugg boots. It took one look at me and ran across the room, luckily I managed not to wake the whole house up.

I didn’t say much else about Dublin yesterday so I’ll tell you a bit more about it today. We travelled up on Wednesday afternoon because we had to be in the hospital early yesterday. We stayed the night in the Sheldon Park Hotel which sounds very posh but is a Best Western. It’s the nearest to the hospital. We had breakfast this time and it was lovely. Jono loves his food so he had a glass each of cranberry, orange and apple juice, a cup of tea, ham, cheese and chicken which he made a sandwich of and added tomato ketchup (at 8am!) followed by bacon, sausage and egg…..I don’t know where he puts it all. I’ve also never heard of a hotel serving chicken at breakfast!

When we got to the hospital the kids had their blood tests first. At every clinic you go to you have to take a number and wait until your number is called, it’s like a cross between Argos and the bingo 😉
Anyway the blood tests went OK, both kids aren’t that impressed by needles but they were very good. Then we had to wait at Jono’s clinic…..I swear one of the staff members had died but nobody had told her, she moved so slowly. I was tempted to check the people in myself. In between the two and a half hours we had to wait to see Jono’s consultant we went off to get Lucys dressing changed and she’s fine now (thank goodness!)

After all the hospital appointments, we went to have a quick look around Dublin. There was a taxi drivers protest on so O’Connell Street was closed to traffic and there were lots of taxis parked down the street. We got back to the train station to find a queue of people waiting for the train, they pushed so much that the kids almost ended up down the gap between the platform and the train…..I really don’t know what the panic was. The train journey is three hours so it’s fairly boring. I had a coffee to try and keep me awake….I don’t know why I do because it tastes awful and it costs 2 euro 25! Here’s a pic of it….and this is with the milk added. 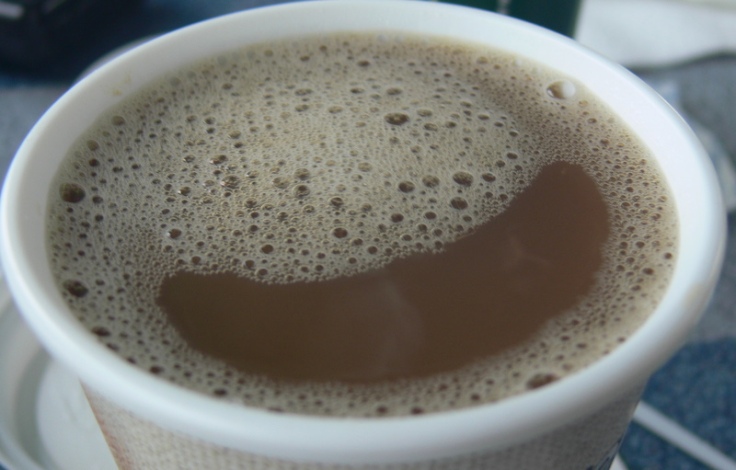 Andy is still hobbling, poor fella. If anything he’s getting worse….I wonder if the back doctor will do a buy one get on free? 😉