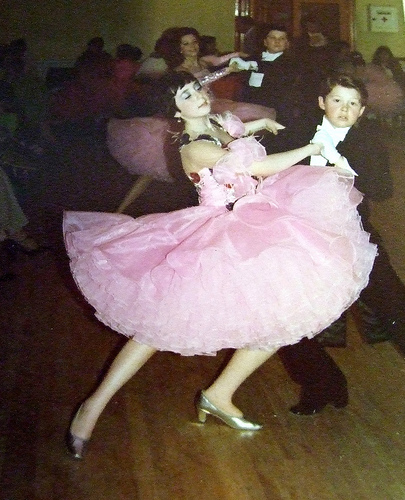 A bit of a mishmash of a post so bear with me. I ‘had’ to write this post and I haven’t had breakfast yet so this is probably going to be all over the place.

One of the things that came up in my counselling sessions was my grief at having to give up dancing and yes I’m aware of how dramatic that sounds. I had no idea this was even in me but it makes a lot of sense now I think about it.

Dancing wasn’t just a hobby for me it was my whole life. I’d been dancing since I was three years old and it was probably the only time in my childhood when I felt at ease and happy. Once a week I would get on a train to London by myself to go for private dancing lessons, this was from the age of ten – no fear back then.

Every weekend was spent competing in dancing competitions all over the country. We were pretty good at it, we won a lot of competitions, we danced in the Blackpool Tower and we even won a trip to Antwerp to compete in the European Championships. We never got there.

One Saturday morning Adam, my dancing partner, and his dad came to pick me up to go to a competition. I was told that was it, no more dancing. I can still see myself looking out of an upstairs window at Adam in the car. I wasn’t allowed to say goodbye. The dancing dream was over without me even having a choice.

I was heartbroken, my whole life was spent working on the knowledge that I was going to be a dance teacher. The one thing that was keeping me sane was ripped from me. I’ve now realised that this is why I bounce from one thing to another. I don’t throw myself wholeheartedly into anything, in the back of my mind there’s a fear that if I love something too much I will lose it.

We had our first choir concert last night and it was almost like looking through that window again. I was on the outside looking in. I wasn’t sure until I actually got there if I would even go. I slapped some makeup on, gave myself a kick up the backside and went. I was grand until the interval I felt so alone that I almost left. I know this is my own doing, it’s very hard for me to try to fit in and I do feel like an outsider. Thanks to our lovely choir master I stayed and I’m kind of glad I did but I don’t think I’ll ever sing in a concert again. I like the rehearsals for fun but I don’t think the serious side is for me. I did stay afterwards and had a couple of drinks and a chat with a friend and I enjoyed that, so for me to even stay in a busy pub where I couldn’t see the door was quite and achievement.

I would like to try dance classes again. Not the same kind of dancing as before, too many memories. Something new though and just for fun. I was at my fittest when I was dancing – even though when I was the size I was in the photo at the top of this page I was made to go to weight watchers –  hence the obsession with my weight. Jaysus I have a lot of baggage!!

Anyway I’m going to have breakfast now. Thanks for taking the time to read this, apologies if it’s all over the place x