If this blog post title seems quite familiar it’s because it is. I seem to be living in some kind of strange groundhog day either that or it’s just history repeating itself.

If you are a regular reader to the blog you will know my old faithful peeling green car Gilbert decided to fall apart on me a few weeks ago. I’ve gone from buses, trains, walking, hire cars to having the wonderful ADAM – but he had to go back on Monday so I was back to square one while I was waiting for Gilbert to be repaired.

The lovely mechanic came to my rescue when he lent me a huge tank of a car which has been nicknamed ‘The Hearse’ (thanks Olivia!). The hearse was a bit tempremental in the mornings, like myself, I joked to the mechanic, he wasn’t impressed! Off I went in this monster of a car, I was quite proud of myself as I managed to keep it between the ditches – always a bonus! I also managed to park the thing, no mean feat I can tell you.

Tragedy struck after a couple of days when ‘The Hearse’ started jumping and the engine light came on. It jumped passed the millions of guards, out in force awaiting the arrival of Prince Charles in Sligo – thankfully they didn’t seem to notice! I got home and hoped the next day would be better…..it wasn’t!

Not only was ‘The Hearse’ jumping, and it wasn’t for joy, it also refused to pull out of turnings, which was quite a problem as there are a good few from here to Sligo. I tried speaking nicely to it, getting cross with it, trying clutch control, giving it more gas, giving it less gas…nothing worked. So I spent much of the journey crawling and jumping (well not me but the car!) All was sort of going OK until a car pulled out in front with quite a lot of smoke coming out of the exhaust – we carried on jumping behind it until the smoke starting billowing out – I thought ‘The Hearse’ was in trouble until I saw this car. The poor people had to pull over with their car that was on fire, I couldn’t even stop because I had such problems with ‘The Hearse’.

We finally limped into town, by this time the engine light was flashing on and off and ‘The Hearse’ was going so slowly I saw a few snails whizz by us. I think it’s safe to say ‘The Hearse’ is dead. This was how I felt by the time I got into town! 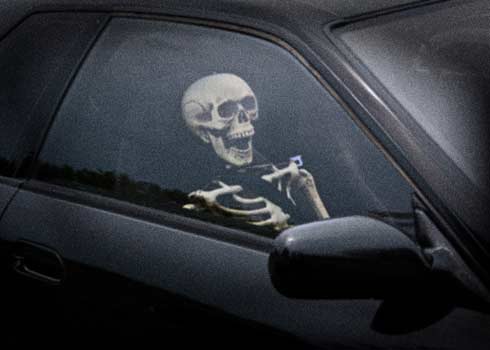 On a positive note the coffee morning at Inion Veigh was just lovely and did wonders to calm my nerves and Gilbert is back on the road again! I’m really hoping my car troubles are over!