Yesterday I headed to Tubbercurry as part of my Wild Atlantic Wayfarer project. It was time to take to the water on Lough Talt with Wild Wet Adventures. I have renamed June – Junuary as the weather was much more like January than June. We had a gale blowing and I think at one stage there were even hailstones! So it really was a wild and wet adventure!

You won’t meet nicer people than John and Celine who run Wild Wet Adventures, they make everyone feel instantly at ease and have a great sense of humour, which is much-needed with our summer in Sligo so far. The first challenge for me was getting the wet suit on – this time I managed not to thump myself in the face – so that was a bonus!

John was great at explaining how we should paddle and where the safest parts of the lake were, as it was very choppy we stayed in the shallow part, which is only waist deep, so not too bad if anyone happened to fall in.

It was to be my first time kayaking, although to tell you the truth I don’t think I was actually in a kayak! I did sit in one but I have an Achilles tendon problem and it was giving me grief so I tried a couple of different crafts. I think one was called a ‘sit on top’ – I’m saying nothing 😉

It was tough work paddling into the wind. I managed OK in the beginning but after that I failed! This is really the only challenge that has beaten me so far, although I do think it had a lot to do with the weather – well that’s my excuse! I ended up being towed out of a sandbank by John – sorry John.

The rest of the group was much more energetic than I was and even had a try at paddle boarding. I sat in the trailer nursing my cup of tea and cakes that Celine had given me – I can’t pass up cake. I did love how relaxing it was when I laid back on my craft and just floated along…that wasn’t what I was meant to be doing. Also two swans that were gliding along beside me flew right over my head but I was just too slow with the camera. It was a miracle I didn’t fall out, although I did wobble a few times. I highly recommend Wild Wet Adventures, its great fun for all ages and a fantastic day out. It’s almost time for their Summer Solstice dawn paddle which was brilliant last year. 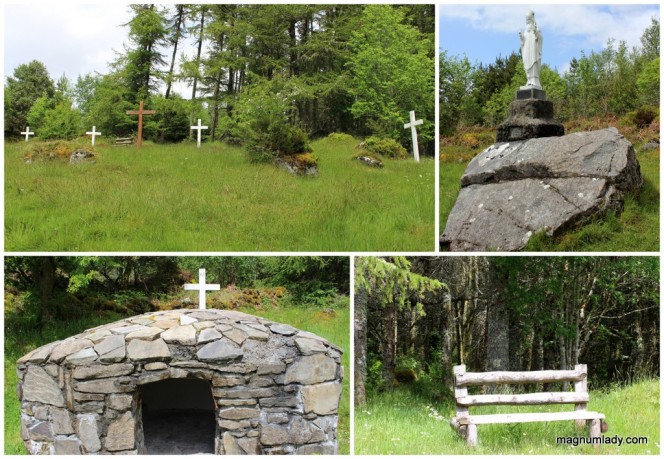 After I said farewell to Wild Wet Adventures I took the scenic route home along by Lough Easkey and through the Ox Mountains. The first thing I saw was Mass Rock. The Mass Rock was the local site for gatherings to say mass during penal times when the practice of the Catholic Faith was forbidden.

Mass is still offered there once a year at 7am on the nearest Saturday to midsummer’s day.

It’s a really lovely drive to Lough Easkey, I had to stop a few times to take photos. I didn’t take any photos of the lake itself though because the weather was just cat by the time I got there. It’s a great excuse to go back again though.

Sincere thanks to John and Celine from Wild Wet Adventures for a great adventure! It’s a brilliant activity for people of all ages and if watersports aren’t your thing they also do guided walks around the stunning Ox Mountains. You can find the website here, they are on Facebook or you can call them on 086-7222750