I’ve done a few courses over the last year. The first one was computers, the second a cooking and budgeting course and the third and by far my favourite was drama. It may surprise people but I’m actually very shy in real life – even though sometimes I don’t seem to be and it was with trepidation that I walked into the first drama class. I hadn’t done any drama since school although I really love going to see a good play or musical…anyway I’m rambling. 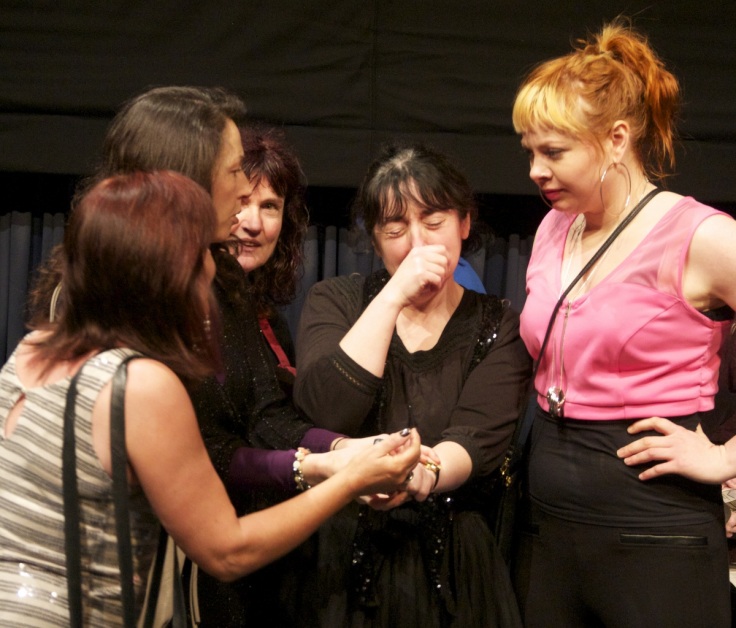 I found out by accident about the class. A friend at my computer class mentioned to me that the ETBI had a weekly drama class starting and I thought it sounded interesting and fun. It was both, initially I was shy but Noirin, our teacher is lovely and so good at putting us at ease and the other people were great. It’s a great way of meeting people and of gaining much-needed confidence.

The photos, in case you are wondering is from a play the group wrote called ‘The Mystery Train’. We all got together in different groups and wrote and performed various scenes. The top two photos are of me playing ‘Shakira’, a drunk girl in a nightclub toilet whose life is falling apart but she’s more concerned about her broken nail. The photo above is ‘The Rose of Tralee – Sligo Style’, I was Dermot the farmer who was chaperone to the ‘roses’. We only performed the play once and I kept it very quiet although to be honest I’d love to do it again, it was so much fun and everyone supported each other. I hope I’ve made some friends for life within the group and I really hope there is another drama class taking place in September – I’ll be first in the queue.

Thanks to Sinead from Lough Bo films for the great photos. Thanks to the rest of the gang for the laughs, thanks to the ETB for running the first adult drama class in Sligo (please do another one) and a huge thanks to Nóirín for encouraging us, mentoring us, putting up with us and occasionally giving out to us. 😀

One thought on “It’s never too late to learn”