It’s hard to believe it’s a week ago since I went to BloggerConf. Not only did I go I was asked to speak as part of the Irish Bloggers Group about our ‘Just One Thing’ – mine one thing is here. I was so nervous and referred to myself as a dinosaur – which I felt like compared to most of the young things. I also felt old enough to be mammy to most of my fellow bloggers!

As I walked in to The Marker Hotel where the conference was being held I felt very out of place. My knees were knocking and I was wondering if I should be there at all amongst all the young, beautiful bloggers. The lovely Caitriona from Wholesome Ireland was at the door with a smile and a big hug! Caitriona introduced me to Aisling – The SuperFit Foodie, who is just a pet and it was a pleasure to meet her.

It was also great to see Katia and Amanda again and to meet Claire – who I’ve known for years online but never met. I also met quite a few other bloggers who were all lovely.

Darragh Doyle and CherrySue hosted our Irish Bloggers Facebook Group Panel. I love Darragh to bits he’s so supportive and the message was clear – if you like something that people do tell them. Blogging isn’t a competition, it’s a community.

I didn’t get to stay for the whole day unfortunately so I missed Johnny Ward, OneStep4Ward.com and Sean Markey from Wolfgang Digital. I really enjoyed most of the speakers though. There were some stand out ones for me – firstly Oonagh O’Hagan, the owner of Meagher’s Pharmacy. Oonagh – a really inspirational story of starting with nothing and really going for your dreams. She also explained that businesses have to adapt or die. It’s a fantastic story and really made me sit up and listen. 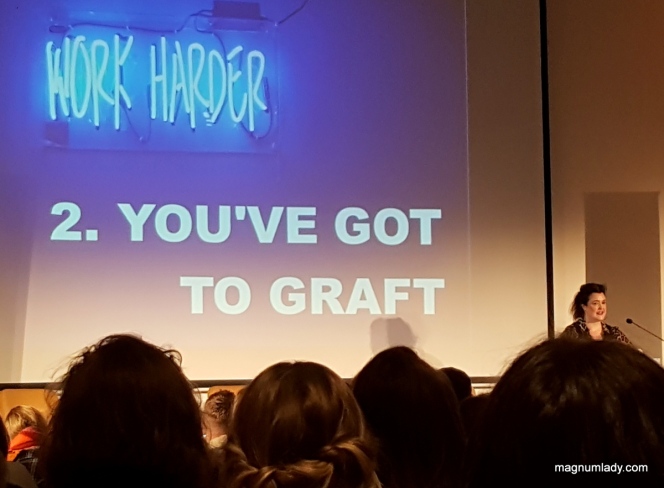 Kirstie – Journalist and Editor of Stellar Magazine was another really interesting speaker. She’s really funny and she knows her stuff. She was saying that you have to work hard to have a successful blog and that it’s very natural to make mistakes.

Eleanor Mannion, mobile journalism and documentary film-making for RTE spoke about a documentary she made using an iPhone 6. Now this was right up my street and totally fascinating. I didn’t get to see the documentary when it was on TV but I’ve watched part of it now and will watch the rest of it. You can see a trailer for the series here:

Another interesting speaker was Anne-Marie Tomchak who is Mashable’s UK Editor. Mashable is the go-to source for tech, digital culture and entertainment content for its dedicated and influential audience around the globe. Anne-Marie shared this video below which I thought was brilliant:

I also thought the talk by Sinead Keavey from William Fry (Ireland’s leading corporate law firm) was very interesting. She was reminding bloggers that it’s not OK to just take photos from the Internet  and was telling us all about copyright. I’ve had a few occasions where my images have been used on other sites without my permission so it was great to hear the legal side.

So that was just a brief blog about my day, there was so much more besides, but for me these were the highlights – apart from our Irish Bloggers Facebook Group panel of course! Thank you to Darragh and Emma O’Farrell for the invitation to speak at such an interesting event. It is up there with one of the scariest things I’ve ever done! In fact jumping off a cliff was less terrifying!