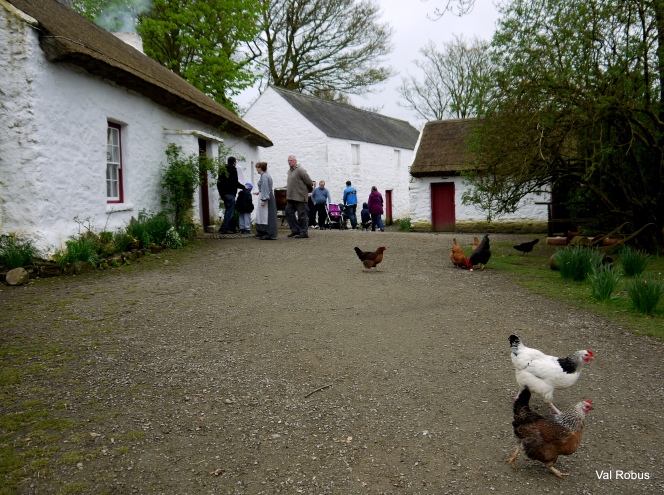 On Saturday I took Jono to the Ulster American Folk Park in Omagh, Co. Tyrone. It’s about a two-hour drive from here but it’s a lovely place and it’s years since we’ve been there.

You start the tour in the visitor centre which also houses a cafe, a shop and exhibitions. At the moment there is a Titanic exhibition running which is really interesting. There is also the story of emigration told through visual displays.

The photo above is Jono in the ‘single room cabin’ which is the first home you come to in the outdoor park. The tour guide there was telling us that the cottage was once owned Devine family. It’s an example of the type of home that landless people lived in before the famine.

It’s hard to believe a family of seven lived in just one room. The folk park is very authentic with guides in most of the places although you are free to walk around the park on your own. Turf fires burn and the furniture is in keeping with the era. Most of the houses and shops are original which were demolished stone by stone and re-built in the park. 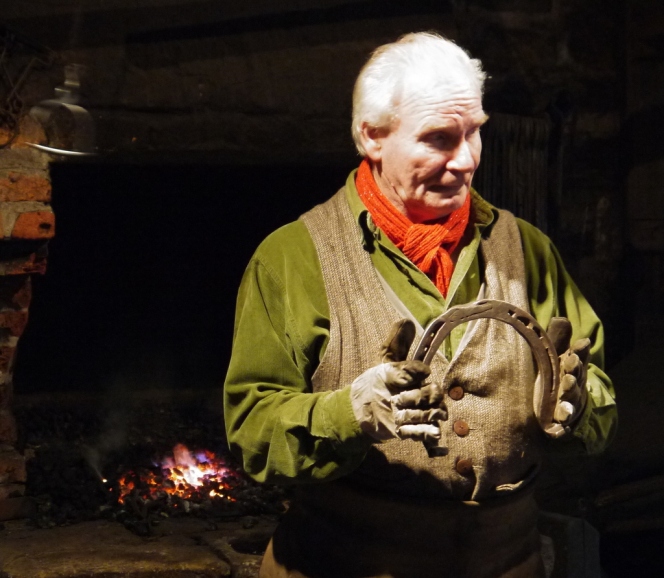 The blacksmith told the story of how the families struggled to pay for shoes for their horses. Even the poor families would have had a horse to plough the land.

As we went on a ‘major event day’ there were various extra activities going on including ploughing. It looked like very hard work. It’s hard to imagine how people managed with very little food and such hard work.

In the weaver’s cottage we saw a business run from a home. There was even a room taken up with a huge hand-loom. The flax fibres were turned into yarn and the whole family were involved in this industry. 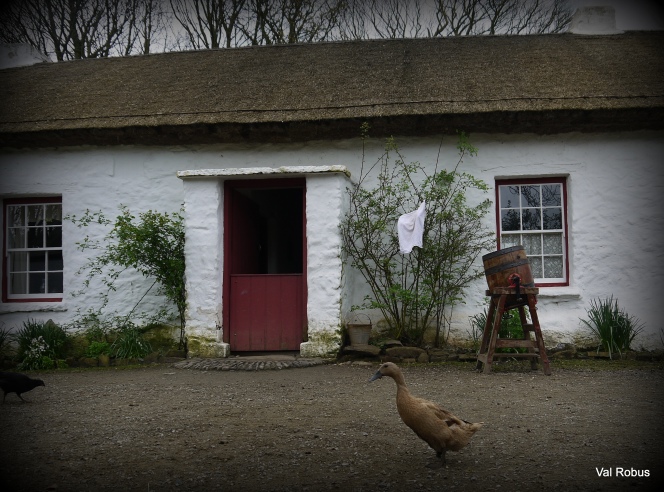 Our favourite home was the ‘Mellon Homestead’ which is a small farmhouse standing on its original site. The Mellon family lived here until they went looking for a new life in Pennsylvania. We got to see the chickens and ducks and also tasted traditional homemade bread.

There were all kinds of people wandering around the place in traditional costumes. The two ladies above were hilarious, they were going into the various houses and trying to steal things.

There was also a campsite of travellers set up in the park, complete with a fortune-teller and music. You can also visit the two churches and the school-house. After walking through the ‘Irish countryside’ you come to ‘The Ulster Street’, it’s a collection of traditional 19th century Ulster shop fronts. 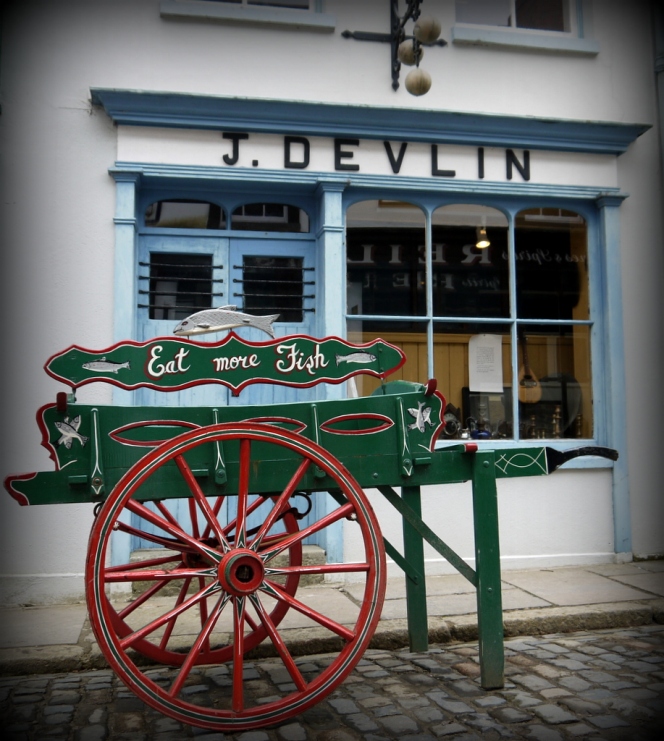 We called into the printers where you could get your ticket printed to board the ship to bring you to your new life in America. As you walk onto the ship you see how cramped the conditions were. People spent between 6-12 weeks sailing to America, you can hear the sounds and really imagine you are sailing. 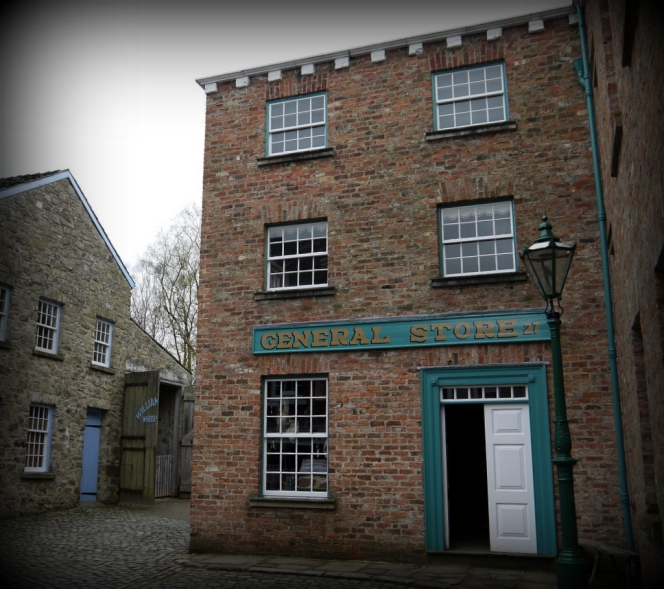 When you get off the ship you are in ‘America’. It’s funny because listening to some of the children going around they were saying ‘Wow we’re in America!’ 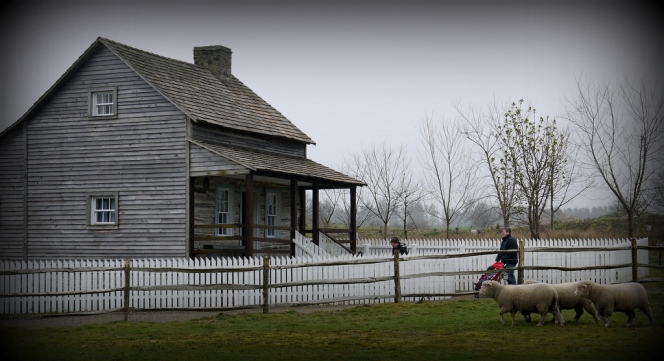 The houses in the American side and made of logs and some of them are bigger but to be honest it’s quite sad looking at them because although they are bigger the way of life was much the same as Ireland. So these people made an awful journey to what they thought was a better way of life and in most cases it was still working on the land, weaving and struggling to live. 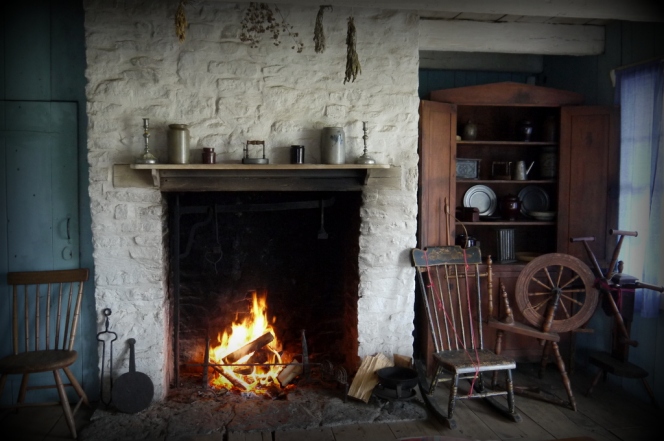 It really makes you realise how lucky you are when you think of how these people lived. Other activities going on over the weekend were sheepdog trials, a bird of prey display, firearms display, live music and a Punch and Judy show. All in all it was a wonderful day out. The only thing I would have liked would have been more animals in the farmyard, maybe a goat and lambs and also not all the shops were open when we were there. Some of the staff were on their lunch break (it looks very odd seeing people in 1800’s costumes eating in the cafe 😉 As usual I took way too many photos which are here.

I also took some video: