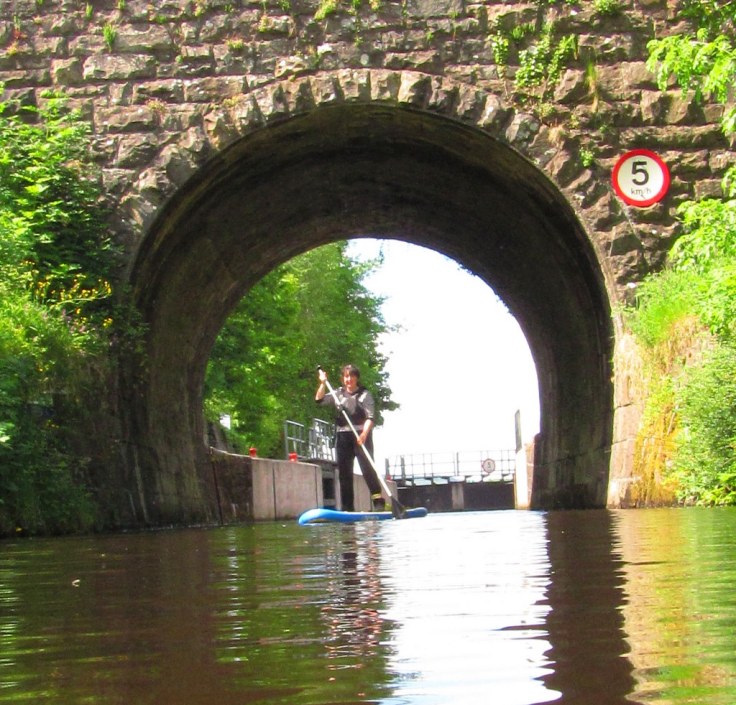 Yesterday I visited Drumshanbo, Co. Leitrim for the first time ever. I don’t know why as it’s a beautiful place and not far from home.

I knew it was going to be a special day when I got out of the car and one of the locals (above) welcomed me!

I met up with Lee and Zoe from the Leitrim Surf Company. They agreed to show me part of their world so we took to the water and went stand up paddling on the Lough Allen Canal.  Lee was telling me that the Lough Allen canal was originally built to take coal from the Arigna mine down to Dublin.

Lee was great at teaching me how to stand up on the board as you have to start off kneeling. He does make it look easy but even I managed to do it and I don’t have any co-ordination skills.

I was also delighted when Lee let me borrow his waterproof camera. Mine drowned on its first sea visit on Monday (long story). So there I was gliding along the water and snapping occasionally. When I arrived in Drumshanbo I was a bit stressed but the minute I got onto the board I was totally relaxed, it’s such a calming way to spend time.

The first thing I saw were two kingfishers flying in front of me. I wasn’t quick enough to get a photo but I was so delighted to see them. I’ve never seen kingfishers before. We were also surrounded by dragonflies and damselflies.

After a short paddle along the Lough Allen Canal we ended up at a beautiful lake called Acres Lake. I’d never heard of it before but it was just stunning. The water lilies were out in bloom and the cloud reflections were amazing.

We spent some time paddling around the lake, searching for damselflies and watching the fish jumping. It was like a little bit of heaven, especially when the sun started shining.

I had a really lovely afternoon with Lee and Zoe, I highly recommend it, it’s the perfect way to relax. Leitrim Surf Company travel to various places so if you want a paddle along a particular waterway just contact them. It’s also a great way to spend time as a family and explore the Blueways. I think it’s a place I need to do much more exploring of.

Thanks so much Leitrim Surf Company for a great day out. This is part of my Wild Atlantic Wayfarer project with LookWest and the Hawk’s Well Theatre.

2 thoughts on “Walking on water in Leitrim”