At the beginning of the year I saw a feature on Sky News about disused underground stations being open to the public for a limited time.

I’m a real train fan and visiting a disused underground station has been on my ‘to do’ list for years. Unfortunately when I booked it earlier this year I had no idea about San Francisco or Lucy moving out….but these things happen and although the timing could have been better it was an amazing experience. 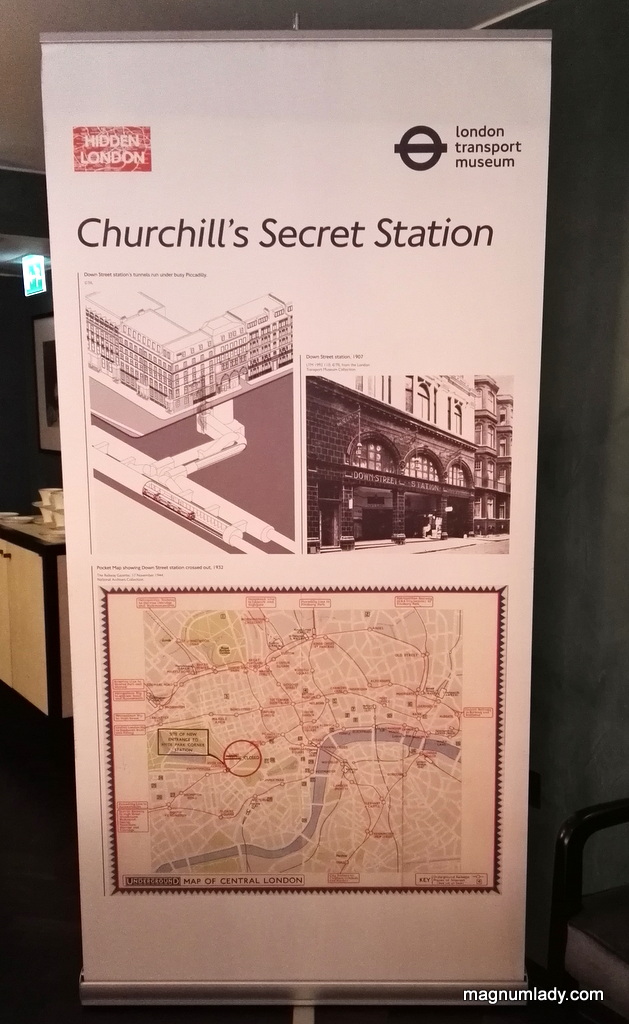 I was very lucky to get a cheap flight from Knock to Luton and was in London in less than two hours. Down Street station was only in use from 1907 to 1932, we were told there were a number of reasons why it stopped being used. Firstly that it was very close to both Green Park and Hyde Park Corner Underground stations. Secondly that perhaps the people of Mayfair didn’t like the station being there in case it attracted undesirable people.

Our guides were June and Geoff, both are volunteers for Hidden London Tours which are run by the London Transport Museum. I can’t begin to tell you how atmosphere it was being underground with trains thundering by every couple of minutes.

When they came along we had to switch our torches off so as not to distract the train driver. It was very eerie standing in the dark!

We walked along dark, narrow tunnels and you could only imagine what it would have been like in the 1940’s. You see Down Street is not just an ordinary disused underground station. In the Second World War it was transformed into the Railway Executive Committee’s bomb-proof bunker.

The nation’s railways were coordinated in Down Street and it’s thought that Prime Minister Winston Churchill took refuge secretly at the height of the Blitz.

Although most of the items from those years are now gone there are still reminders of the bathrooms, wiring, phone exchanges, signs etc. It’s hard to believe that people would have been down there for weeks on end. There was even a kitchen in there during the war. How must those people have felt? No natural light, no communication with their families, confined, pretty grim tunnels and rooms to live in. It must have been a really tough existence.

Although Geoff doesn’t think the station is haunted I think there was something because my camera really started acting up. I got several error messages and only managed to take about 6 photos with it. Most of the photos on this post were taken with my phone. I’d love to go and check out more underground stations, it really was fascinating to get a glimpse into the past.

The rest of my photos are here.

Another for @pluid.project2021 #nationalcomfortblanket #art #painting
I'm new to tiktok. I have no idea what I'm doing
Wood sculpture at Knocknashee