‘No one would have believed’, (sorry couldn’t resist), what a fantastic weekend we had in Dublin. Before you read on if you don’t want to know what happens in the show then stop reading because I don’t want to spoil it for you.

We got the train up to Dublin on Saturday and I booked the Clarion Hotel which is the nearest hotel to the O2…I was kind of hoping and wishing that the cast might be staying in the same hotel….and they were!!

Anyway the hotel was nice enough, nothing too special and it’s a four star so I sort of thought it might have been nicer, but there was a pool and the beds were nice and comfortable, the staff were excellent, very friendly and helpful.

We got drenched on Saturday as it was lashing rain and we got lost somewhere around the Merrion Square and had to ask the doorman at the Merrion Hotel for directions to Stephens Green. After we had a look around we headed back to the hotel where Jono and I decided to do some (stalking) looking for celebrities.
We walked through the hotel and I was convinced I saw Jeff Wayne having dinner. So we all trooped down to reception and waited patiently until he’d finished. Then we got to meet him and what a lovely, lovely man. He spent about twenty minutes talking to us and was happy to let me take photos. He is so down to earth and friendly.

The next day Andy and Jono headed off to Dundrum shopping centre. Lucy and I spent the day in the hotel chilling and making the most of the leisure centre. We saw Jeff Wayne again and he stopped for a brief chat. Then a bus pulled up with some of the band on it and also Alexis James who plays the Artillery Man. We got to meet him and had our photos taken with him.

After our swim we were having lunch in the hotel and who should be opposite us but no other then Justin Hayward so again the camera came out! I was surprised how tall he was.

When Andy and Jono came back from Dundrum (which they enjoyed especially the sushi bar), we headed to the O2. I’ve never been there before so it was all an experience, couldn’t believe how many people were going. Our seats were pretty rubbish….21 rows up, although some poor people were right at the back and I don’t know if they got to see anything. It was difficult where we were to see some of the screen at the back.

The show started about 10 minutes late. It was really exciting. We were a bit surprised when Justin didn’t come out to sing his bit at the beginning, but since found out there was a problem with his monitor so he couldn’t hear. Some of the sound was a bit muffled but as it was the first night I’d say it was teething problems.

Richard Burton was done differently to last time. It wasn’t a 3D head, this time his head was on a polythene sheet. I thought it was better as he had much more facial expressions and was able to ‘look’ at the screen and actors instead of just looking straight ahead.

Alexis James was fantastic as the Artillery Man, he has so much energy, even leapt off the stage and ran around the audience….amazing.

Chris Thompson was brilliant too singing Thunder Child, we were just sorry we didn’t get to meet him.

Justin Hayward sang Forever Autumn with such emotion and during the song paper leaves came down from the ceiling….which was a lovely effect….I managed to get some during the interval.

Jennifer Ellison was lovely as Beth, she has a great voice. At the end of Spirit of Man she is in a white gown and it’s really clever because the gown goes up as if to heaven (she goes down through a trap door). Shannon Noll was Parson Nathaniel he was good but personally I would have like to see Russell Watson again, as he played the part on the dvd we have and I thought he was great.

The lightshow and musicians were amazing. There were some small fireworks as well, which all added to the brilliant atmosphere.

At the end of the show all the cast came back on stage and sang together which was great. The crowd all stood up and cheered…..it was brilliant. The only thing I’m sad about is that I can’t go back and see it again.

The following day I was waiting for the lift at the hotel and as the door opened Jennifer Ellison was standing in the lift with a towel wrapped around her waiting to go to the pool. She was lovely, so friendly. We got talking to her as she was leaving the hotel and she said her illusion went wrong. The gown got caught in the trapdoor…..to be honest I didn’t really notice. We got to take her photo too and she signed Jono’s ticket as did Alexis and Justin.
As they were leaving the hotel Alexis waved to us and as the bus pulled away Jennifer was waving.

So all in all it was one of the best weekends I’ve ever had.
There are more photos if anyone wants to see them here: 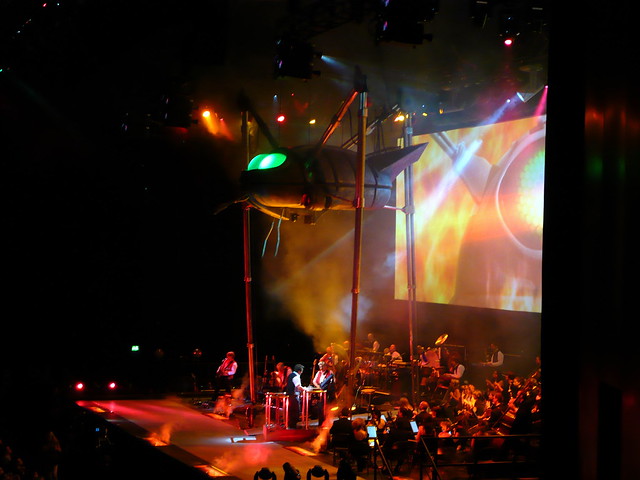 4 thoughts on “The War of the Worlds”